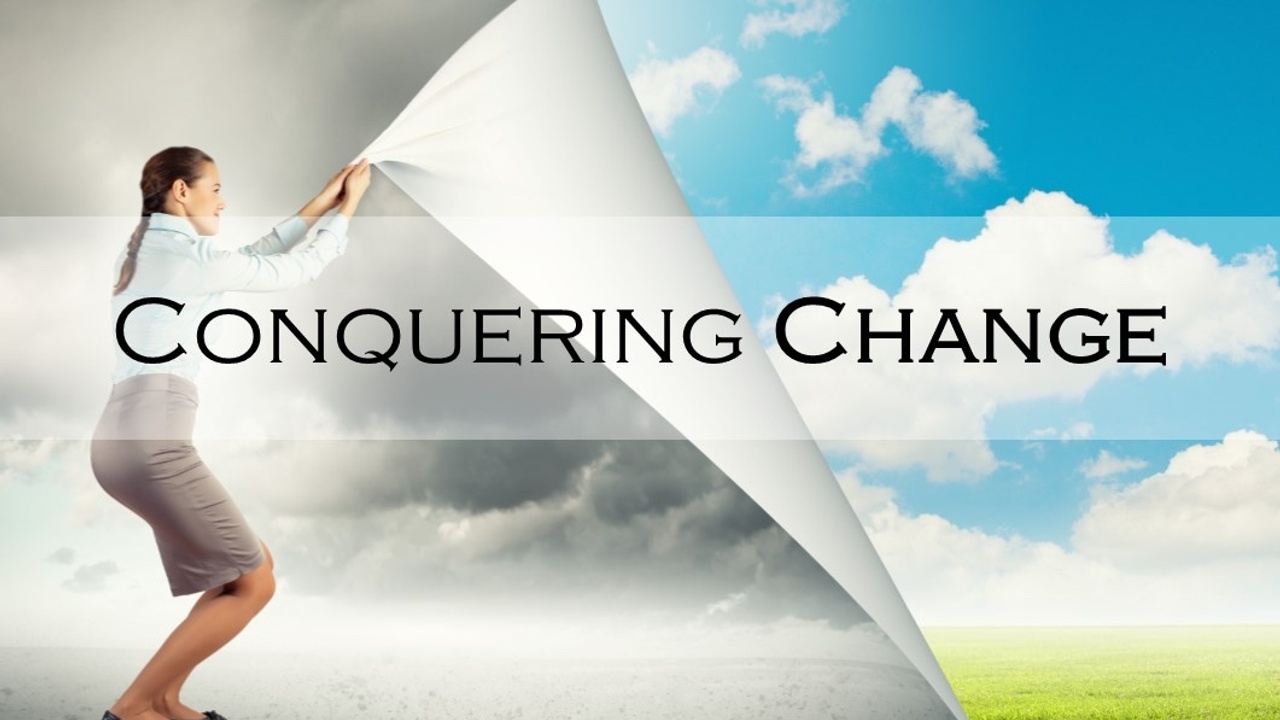 Why is Change Difficult and How Can We Prevail?

Ever tried to implement a New Year’s resolution?  According to FranklinCovey, one third of all resolutions are broken by the end of January, and ultimately eighty percent (80%) are eventually abandoned.

It doesn’t matter if you’re trying a new diet or exercise routine, or considering leaving your marriage, change is hard.  And uncomfortable.  Why is this?  Why isn’t change easier?

According to Dr. Joe Dispenza (drjoedispenza.com), the hardest part about change is simply not making the same choices day after day.  Why is this so difficult?  Because in order to change and experience a reality different from our day-to-day routines, we have to think new thoughts, and make new decisions that are different from the thoughts and actions we’ve habitually made.

These habituated thoughts and actions have firmly established our identities.  Changing our identities is unnerving, because the new state of being is unfamiliar and unknown.  We no longer have the feelings of our familiar selves, and being in that void between the new and the old is so difficult and unpleasant that many people simply slip back into being their old selves again.  According to Dr. Dispenza, “if we can understand that the discomfort we feel is the dismantling of old attitudes, beliefs, and perceptions that have been repeatedly etched into our cerebral architecture, we can endure.”  (Dr. Joe Dispenza, You Are the Placebo, (Carlsbad, CA: Hay House, 2014), p. 65.)

The remaking of our identities is actually a physical process that takes time. Changes are occurring on a cellular level as the brain literally rewires itself.  “New neuronal connections must be sprouted and sealed by the conscious choice to think and act in new ways every day” until these new thoughts and actions become habits.  Ibid. at page 66.

How long does this metamorphosis usually take?  There are many sources that would lead you to believe that creating a new habit only takes twenty-one (21) days – three weeks.  This comes from a widely popular book, published in 1960, entitled Psycho-Cybernetics, by Maxwell Maltz. Dr. Maltz, a plastic surgeon, noticed that his patients seemed to take about twenty-one (21) days to get accustomed to their new faces. (Signe Dean, “Here’s how long it takes to break a habit, according to science,” sciencealert.com, September 24, 2015.)

In 2009, nearly 50 years after the “21 days” finding from Maltz, a study from the European Journal of Social Psychology, suggests that the length of time it takes to form a habit really isn’t precise, and can vary, individually, from eighteen (18) days to two hundred fifty-four (254) days.  The average time it takes to cement a new habit is sixty-six (66) days or about two months.  Ibid.

The average time it takes to cement a new habit is… about two months.

So what are we to do during these two months of discomfort?  Ideally and most effectively, we create a positive, replacement behavior for the old habit. Ibid.  What does this mean?  Well, if we want to kick our habit of drinking a couple of cups of coffee in the morning, we replace the coffee with a new behavior, like drinking herbal tea, rather than just trying to go without coffee.

In a different example, studies have found that smoking cessation aids, like nicotine gum, tend to be more effective than a nicotine patch.  Why?  Because we’re creating a replacement behavior with the gum.  So, instead of reaching for a cigarette, we reach for a piece of gum to satisfy the craving.  If we get a craving while on the patch, there is no replacement behavior.  We just have to steel ourselves and try to make it through.

If we decide to leave a relationship, it’s good to have replacement behaviors in place to help supplant our need for connection (whether functional or not) from our partners.  We may want to commit to going to the gym in the evenings, having regular dinner dates with our friends, join a book club or take a class to learn a new skill in the evenings.  Otherwise, it becomes very easy to substitute the old relationship with a rebound relationship to meet our need for connection.

So, whatever we’re trying to do or change, it’s going to take some commitment and fortitude to be with the discomfort we’re feeling.  If we know, however, that this is a totally normal part of the process of changing which indicates that we’re physically changing and rewiring our brains, we can do it.  And we can make the change easier on ourselves by consciously choosing replacement behaviors that will help us prevail.

What changes are you thinking about making?  What resistance is coming up for you?  Are you willing to feel uncomfortable to instigate an important change?  What replacement behaviors can you adopt to help ease the transition? What pre-planning can you do so that you don’t fall back into old behaviors or create new behaviors you don’t like?